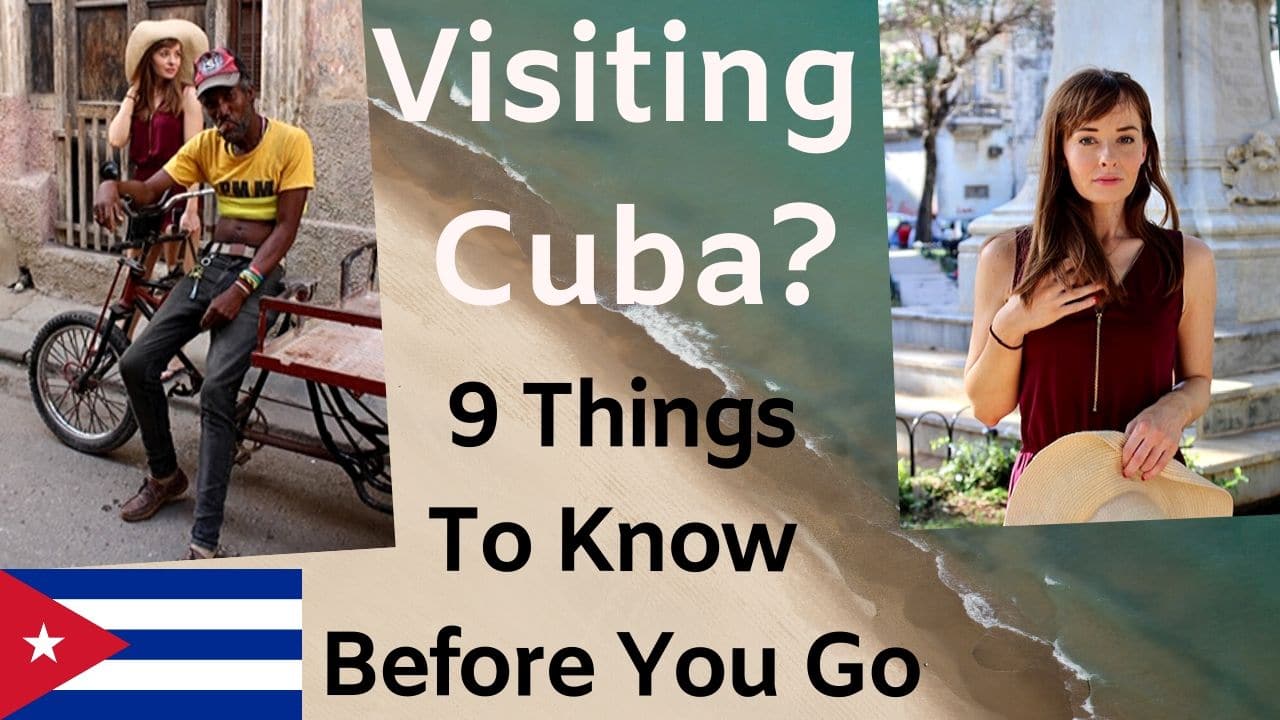 I recently returned from my first trip to Cuba. I spent 5 days in Havana and one day in Varadero. Overall, I had a blast.
Cuba is a very interesting, beautiful country and I’d definitely come back.
However, now that my first trip is behind me,I want to give you the advice I wish I had received before traveling there.
Note: I didn’t go without Googling or searching about it on Youtube. I had read online about traveling to Cuba, but a number of sites gave me conflicting or obsolete information. So…
Let’s set the record straight in 2020. Here are 9 things one should know about going to Cuba (esp. as a US citizen):

First– the Cuba travel card.
Some of you may be thinking “Wha?! In 2020? Are US Citizens even allowed in Cuba? Didn’t the president change the rules?”
While I was in Havana I remember some Canadian tourists asking something along the lines of “are you allowed to be here?”–very politely, of course.
The answer is Yes indeed we are allowed in Cuba.
According to locals, the volume of US tourists has declined recently (I believe cruise ships stopped docking there). Also, I couldn’t get a direct flight from LAX — I believe all must go through Miami.  Although I’m not a fan of layovers, I got a killer deal that would have been crazy to pass up.
So here’s the thing: I read online that they don’t allow tourism in Cuba, and in order to visit you actually have to self-declare your reason for visiting as something that falls into one of twelve categories– family visits, research, journalism, religious reasons, etc…but the most popular one, according to what I had read, is something called “Support for the Cuban People” or “SCP.”
The deal is–allegedly–that you’re not supposed to stay in a hotel- as part of SCP, you stay in an Airbnb/casa particular, and you have to create a legit itinerary that involves cultural activities, etc.– not just chilling at the beach. Allegedly.
Well…
I went to Cuba last week and I’m telling you that’s NOT the case.
It is SO much easier & simpler than you think.
Here’s how it works:
when you get to Miami airport, you buy a Cuban visa card for $100.
Where in the airport? Literally right by your gate counter.
Long layover? Don’t freak out.  The kiosk rep will show up within an hour of boarding time.
DO NOT do what I did.  Arriving in Miami approx. 6 hours before my flight, I actually went out of security and walked all over the place, asking around until I finally was led to the Cuba-ready kiosk. It was a desk by the American Airlines check-in counters. If I had just waited until an hour before boarding, I could have avoided going through security twice…**sigh**
I handed over my passport to the man behind the desk. After paying the $100 fee (credit card is fine), he handed me my travel card (two identical forms with a perforation down the middle). He also gave me two other forms to fill out–one was a health declaration form (double-sided with lots of questions), the other was something customs-related. On the customs paper, it asks your reason for visiting. There were three categories: tourism, business, and “other.”
Each had a blank next to it for me to check the appropriate category. Unsure of what to write, I looked up at the representative and asked about it.
“You can put tourism,” he said.  “They don’t care.”
I actually ended up checking the space next to “other” as well as “tourism” (just to cover my bases).
When I arrived in Cuba, they actually didn’t care…my card was stamped within seconds.  I handed the health form to one of two women sitting at a desk on the way to baggage claim. I didn’t even bother to fill the whole thing out, but no one said anything. Regarding the customs form I had stressed out over– I think they may have collected it when I left the baggage claim area.  Again, no questions or anything. I don’t think the officer even looked at it.
All that worry for nothing.  Getting into Cuba was a breeze.
And regarding checked baggage– Yes I checked a bag, and there were no issues.  I got out of the airport within 20-30 minutes. I had read articles online saying “don’t check a bag to cuba!” — again, BS.
I googled today (Feb 21, 2020) “check bag to Cuba” and the first result was “Luggage: Do NOT check a bag. Repeat, do NOT check luggage.”

Again, BS.  I’m glad I checked a bag too, because of all the cigars I brought back 🙂

Also: I didn’t wrap my suitcase either. No issues.

A lot of websites told me to bring euros to Cuba, not USD. Why? Because apparently banks/exchange houses charge a 10% penalty on USD exchanges. Note that 1 CUC (1 Cuban Convertible Peso) is valued at approx. 1 USD.

In hindsight, I would have ONLY brought USD.

Here’s why:  before leaving, I got a message from my cigar class instructor (who I was also ordering cigars from) offering my cigar order price in USD, not CUC. I asked about paying in CUC, and she said that either is fine.

When I got to Cuba I found that many shops and restaurants accept USD just as well as CUC at a rate of 1:1.  A number of locals also offered to exchange my USD for CUC at 1:1.  Legit. (Psst. Try Ernesto on Obispo St., in front of the restaurant called ‘La Terraza de obispo‘…the food’s not bad either)

FYI when I got to the airport (with Euros and USD in my wallet), the line to exchange money was LONG and the rates were not great (see pic): 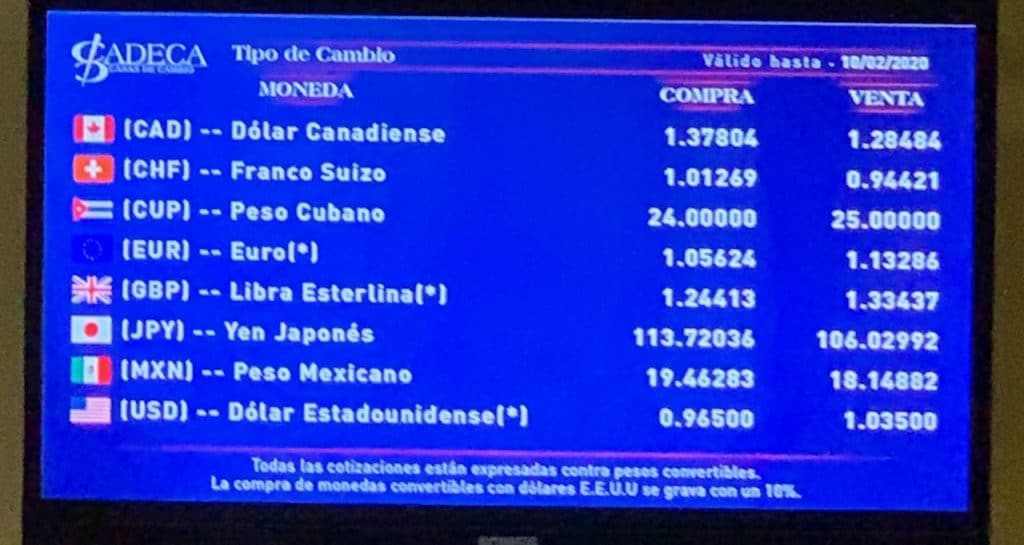 I went straight to the taxi area and negotiated a ride to my apartment. They let me pay in euros. My advice: bring USD and only exchange it when you can get 1:1. Having some CUC on hand is useful; I would recommend exchanging at least some USD for CUC.

But Euros? Nah.  Not necessary. By exchanging USD for EUR in LA and then EUR to CUC, I basically paid exchange fees twice.

No, you don’t need to be a great Spanish speaker to get by in Cuba.  Sure, it would have helped, but I got by fine with the offline version of Google Translator.

Ah….groceries.  Kleenex.  Paper towels.  Fresh milk? Eggs? fuhgeddaboutit. There is a shop that sells Kleenex, but there’s a line to get in.

Here it is on the map (Google maps and maps.me), if you are still inclined:

My apartment did have toilet paper. It wasn’t Charmin, but it wasn’t straight newspaper either.

In the shops, things like cookies and hazelnut spread, soap, and condensed milk are in display cases. Just point to what you want and they’ll get it for you.  In the shops with shelves for you to browse, you check your handbag at the front.  They put it in a locker and give you a key.  Like a coat check.

I was running out of eye makeup remover so I thought I’d grab some in Cuba…after checking a couple stores on Obispo, I gave up looking and just used some vegetable oil I found in the apartment.  I don’t remember seeing one shop that sold cosmetics or skincare except one L’Occitane, near Kempinski hotel. 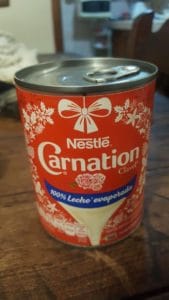 so just be prepared! I did have eggs in one restaurant.  I also saw cows en route to Varadero.  Just didn’t see fresh milk or eggs in stores.

Another food note: the seafood is AMAZING.  I haven’t had shrimp like that since I lived in Dubai…I’m talking Bu Qtair level good…! (if you have been to Dubai and don’t know Bu Qtair, you seriously missed out…).

My fellow millennials and Gen Z-ers will appreciate that there is Wifi in Cuba. However, note that the wifi in public parks is kind of meh…spotty.  You may get kicked off a few times in a 5-minute period. The wifi in hotels and (some) restaurants is marginally better.

For AC & Wifi: try Parque Central hotel, you pay 4 CUC for one wifi card (one hour) and one drink (water, soda, beer, coffee).

Also, Don Ricardo restaurant (“Mango Havana” in Maps.Me –their old name) has cheap food, AC, and good wifi. They are the techiest restaurant I’ve seen in Havana –each booth has an ipad-style screen and Alexa speaks Spanish.  You ask her to open Firefox and then the menu pops up for you to order stuff.  On Valentine’s Day I said “Alexa, te amo” and she didn’t respond.  🙁  Regardless, the food was decent and atmosphere was good. FYI this is not a paid ad or anything. Here it is:

Sorry, no Snapchat in Cuba.  I had no idea that it wouldn’t work there…not a huge deal, just something to know. Facebook, Instagram, and Twitter all worked fine.

7. Yes, you can take home cigars

I believe the rule is that one can take 100 cigars back to the US duty-free.  We are allowed to gift them but not sell them. I didn’t have any issues bringing cigars back from Cuba.  New video coming soon re: Cuban cigars 🙂

Pretty self-explanatory.  I knew before I traveled that I’d have to bargain.

Taxi rides, souvenirs, etc…you get the idea.  There’s no Uber in Cuba, but everyone with a car is pretty much an Uber driver. I flagged down a “taxi”? for a ride from Vedado to Habana Vieja.  He said 10, I said 5, he said OK. 5 CUC it is.

I was caught a little off-guard when I walked out of my apartment my first day in Cuba.

After having slept a comfortable 12 hours, taken my time getting ready, and studying the map for where I could buy a wifi card, I stepped out into the Havana sunlight at approx. noon on a Monday.

“OOOoohhh que LINDAAAA”….then the kissing noises, the “hi baby, where you go?” “you are so beautiful lady” “you need taxi baby?”

It doesn’t matter how educated or classy you are, or how conservatively you dress…if you’re a woman walking alone, be prepared.  I didn’t feel in danger at any time — no one physically harassed me…but it was a little unexpected.  Even when I lived in Dubai I didn’t get a lot of that.  Stares? sure.

But people walking after me, calling me baby, linda, and making kissing noises? nah…

I put in airpods to dissuade people and I’d like to think it worked. Also didn’t make eye contact…I tried to be polite and smile, but yeah…women, just be prepared.

So that’s it! If you have any questions about my experience, leave them in the comments below.

If you’ve been to Cuba recently and have anything to add, please tell us about it in the comments! You never know how many can benefit.

Cuban Cigars 101: what we learned at the cigar masterclass in Havana

Get TF Out of Beginner’s Arabic! Time For Your First Lesson.